skip to main | skip to sidebar

Ever since we went to Carnac in Brittany I have been obsessed with ancient monoliths and Stone Age sites.  I took many photographs at the time and these have been brewing away in my subconscious.  I made a tiny photobook of the trip we made to Quiberon and the surrounding area and occasionally I pull this little treasure out to look at the images.

Recently we were given a project in my painting class following the popularity of the book 50 Shades of Grey - notably unread by all of us!!!.  I immediately thought of my "stones" as a suitable subject.  Being a colourist it was not possible to keep to the brief of simple shades of grey, but as it was only meant to be a starting point, this was not a problem.

My little book of photos has proved to be an invaluable source of material.  Probably giving me enough inspiration for at least the next six months, or more.  I've produced 3 paintings so far this year from this subject matter and I still have at least another three in mind from further images.

The three images below may not represent the final versions of the paintings but they are at least at an advanced stage of completion.  They are all executed in acrylic paint on canvas ~50cm x 40cm. 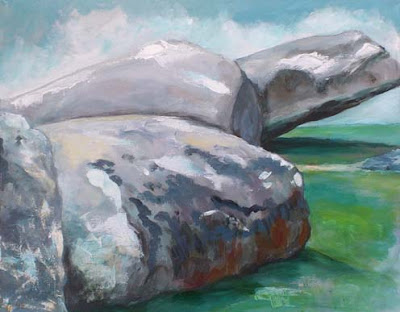 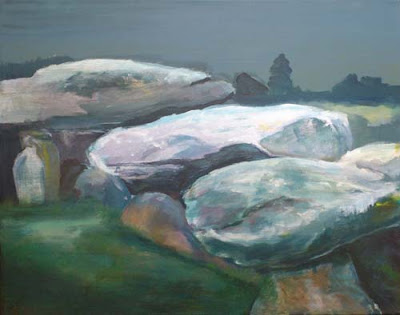 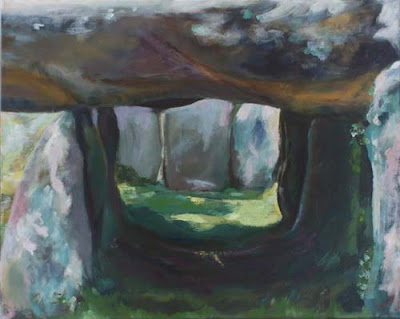 ﻿This has been an exciting departure from the completely abstract phase I've been going through recently.  No doubt I'll be returning to this in the future, but I'm still enjoying the figurative abstract interpretation of these ancient monuments, at least for the time being.

The Second Venice Quartet: The journey to abstraction

I used the paintings inspired by Venice (below) to create the next quartet. This was how the first Venice Quartet was actually displayed; the paintings were not in the same order as in the previous blog. 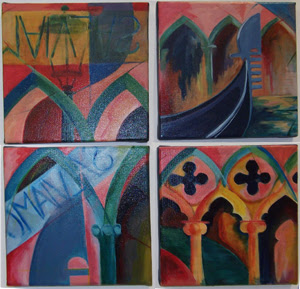 The image on the top left (above) was used as the source material for the second Venice quartet (below).  A "view finder" was cut in the same proportions as the canvases to be used.  Four areas of the painting   to reproduce and enlarge were selected with this "view finder".  The pallet of colours was the same as that used in the first Venice Quartet.  The areas chosen were stylised a little and simplified and the orientation wasn't necessarily the same. 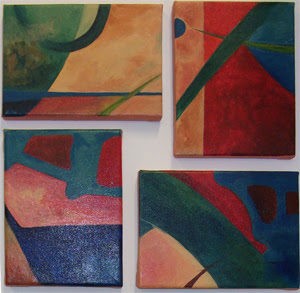 These are the resulting paintings which, for me, are even more pleasing than the original quartet.  The painting itself dictated colour shape and orientation, I felt I had allowed the painting to take over and left fussy detail behind.   These too can stand alone or be presented together.  Both Quartets were displayed in my end of year show last year.
Posted by Unknown at 16:14 No comments:

Last year I made a series of paintings inspired by pictures of Venice. We went there some years ago now and I took beautiful photographs and have wanted to make something of them ever since. However, at the time I wasn't painting much and the moment passed. Since completing my Diploma it has given me the confidence to paint and has set me on the path of self discovery.

I started by looking at travel photos in magazines and my own pictures and found images that I wanted to translate into a figurative abstract painting. I decided on a small square format. The painting was inspired by gondolas and arches from the Doge's Palace. I didn't want nor could I paint like Canaletto or Turner, but I wanted to find my own style. I made some preliminary drawings in my sketchbook and used elements of these on the first canvas, seen here. 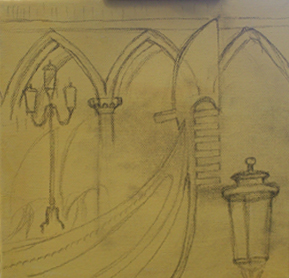 I started to block in areas of colour loosely in thin paint and, whilst painting, decided to lose the foreground image of the lamp as it was superfluous and cluttering up the foreground space, blocking the visual "way in" to the painting. I also took out the architectural horizontal line from the top of the painting as it "cut off" the visual flow through and the lamp post as the small size of the painting did not lend itself to fussy details. 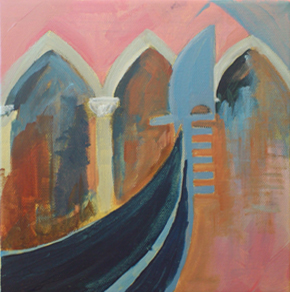 The completed painting introduced water and more vibrant colours as well as extended curves introducing a dynamic quality and movement to the painting.  I subsequently used this technique in all four of the paintings in this quartet too giving a certain amount of unity. 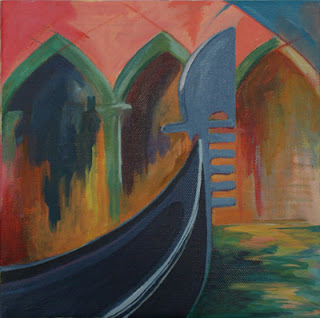 I completed three other paintings using the same pallet as in the first keeping the arch theme throughout.  One picture in a magazine had a banner saying Save Venice  "Salviamo Venezia".   Which I transformed to mirror writing in two of the images.  I reintroduced the lamp form, typical to Venice, in one image as I was really taken by it and wanted to use it somehow. 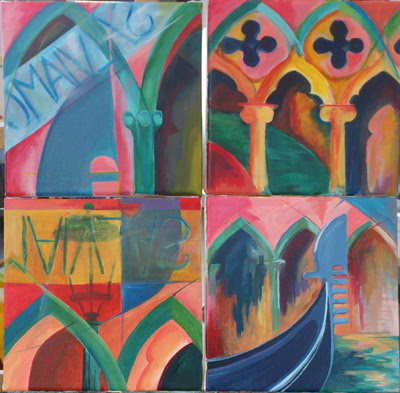 This set of paintings can be viewed separately or together, either in pairs, triptychs or as the whole quartet.  It also inspired a second quartet of slightly more abstract images that I will introduce in my next blog.
Posted by Unknown at 01:49 No comments:

This is a completely new course for me and I have enjoyed learning new skills.  The first project was a  bit difficult as the original teacher had to have an operation and her replacement changed the project.  This was completely fine; in fact I preferred the new project to the original one.

The project is to make a pendant from two types of metal without soldering and using a non permanent method of attachment.  Research into source material for the design needs to be shown. We are required to make three designs and choose one to make.  All experimental pieces need to be displayed and reasons given why the final piece was chosen.

Evaluation of the cost and time taken to make the piece as well as resources required need to be made.

My source material was obtained form the microscopic animals such as the amoeba and Paramecium;. fruits including apples and pears and abstract art; in particular Kandinsky.

I chose to make a pendant/brooch from brass and copper sheet and silver and brass wire.  The final piece is shown below.  I prefer brooches to pendants in general so I thought a dual purpose piece would fit the bill.  the apple hangs from the coil I produced for the brooch pin.  The entire piece is riveted together in sections.  There is no soldering or other form of attachment used.  The final piece depicts an apple with two bites taken out of it and a worm hole.  The apple is 0.9mm brass sheet textured with course grained wet and dry sand paper; the core is hammered and oxidised 0.8mm copper sheet; the pips are also made of 0.9mm brass sheet and textured with very fine grade sand paper and decoratively riveted to the core with silver wire.

I received the result of my formal assessment recently.  A little disappointed that I only received a 2:2.  I thought my essay was worth more than that. My professional artist (i.e those who have masters degrees in fine art) friends have been somewhat more encouraging.  Anyway, onward and upward.  I think my days with the OCA may be over as I am unsure if a distance learning degree in art is exactly what I want, but I haven't made up my mind finally.  I am continuing with my art course at the local college where the tuition is excellent and on hand for critiques when they are required!  It is also lovely to have fellow students available who are ready to encourage too.  I know not everyone is lucky enough to have a good college within easy travelling distance and the time to attend.  I am indeed fortunate!

I will probably continue this blog adding my current work, which includes painting, etching, ceramics and jewellery making as well as digital art.
Posted by Unknown at 02:33 No comments:

I am in the process of trying to get my work in order to send off for assessment in a couple of days (hopefully).  The window for submitting work for the next assessment date is between 15th September and 15th October, as I am off to New York at the weekend for a short break I am trying to get it all together before I go.  It is proving a bit harder than I anticipated and I'm not at all sure that I'm doing it correctly.  I watched the videos on the OCA site and it seems that all types of submission are acceptable but I still need to get the inventory done and, of course, that can only be completed at the end of the process once everything else is in place. As this is digital art I don't have a sketchbook, only my Learning Log, everything else is on computer or on this blog and can be submitted on CD or may be seen on this site.

I have my Learning Log and my Tutor reports for all my assignments.  I only have the Question and Answer sheets for the last three assignments; I don't know if these are essential but I suppose I will need to call the OCA and find out what the situation would be if the missing ones are not available.

Compiling the List of Contents for each item is probably the hardest thing to do now, as all the art work was completed ages ago.  Is it acceptable just to say for example for the Contents of the Learning Log: Projects and Assignments, or should one paginate the Learning Log and list the page numbers for each one?  I have placed the tutor reports in the digital folders for each assignment so these can be submitted on the CD(s) but I will have to make a list of contents for these too.

I now wish I had anticipated this situation at the beginning of the course as I am sure this could have been easier if it had been done progressively rather than all at once at the end.  However, having said that, I can get things together when I need to, to a deadline.  So I hope I'll be able to do it again!  I think I need a bit of luck and a fair wind behind me.......
Posted by Unknown at 02:05 2 comments:

I only have working titles for these new images for the moment. The first two are derived from multiple photographs taken in Brittany this year. The second two are pure digital images. All of these images are finished but I may develop them further into new works.  I may also use any or all of them as a starting point to combine with other images.
﻿﻿﻿
﻿
﻿
﻿
Posted by Unknown at 18:32 No comments:

Add your email address below to follow this blog by email